HIS Constructors, Inc. has over 10 years of experience in raising dams and emergency repairs, giving us the reputation and ability to solve the most complicated dam issues. HIS’ experience ranges from minor earthen dam repair to major construction and reconstruction. HIS’ dam experts can also offer constructability and design review.

In October of 2012, HIS Constructors, Inc. (HIS) completed the construction of a new dam spillway at Bear Lake, near Columbia City, Indiana for the Indiana Department of Natural Resources. An emergency repair, this project consisted of driving new h-piles to support the structure, installing light-weight PVC sheet piling and pouring a new concrete spillway for overflow protection.

Very unstable soils created the need to use PVC sheet piling in lieu of the normal steel piling. In addition, the soil conditions necessitated the use of a foam base that allowed for a lighter weight structure than would normally be built on a project like this. 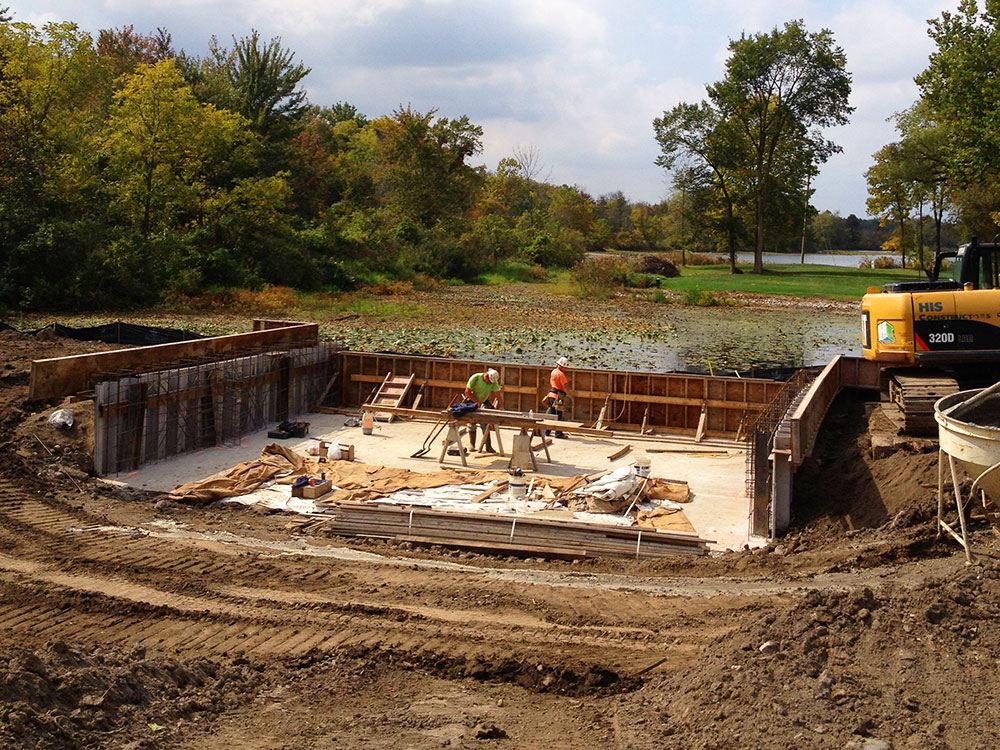 HIS Constructors, Inc. (HIS) was contracted to restore the north and south spillways of Hamilton Lakes. The work consisted of excavation, concrete work, sheet piling, ditch relocation, and reconstruction the asphalt road and parking area. HIS used an 800 lft. temporary port-a-dam to assist with the work on the spillways. HIS installed 900 lft. of sheet piling and placed 1,000 cubic yards of concrete for the spillway cap and outfall structure. HIS installed 14,058 sy. of cellular concrete mat along with 2,000 ton of rip rap to stabilize the outfall ditch. 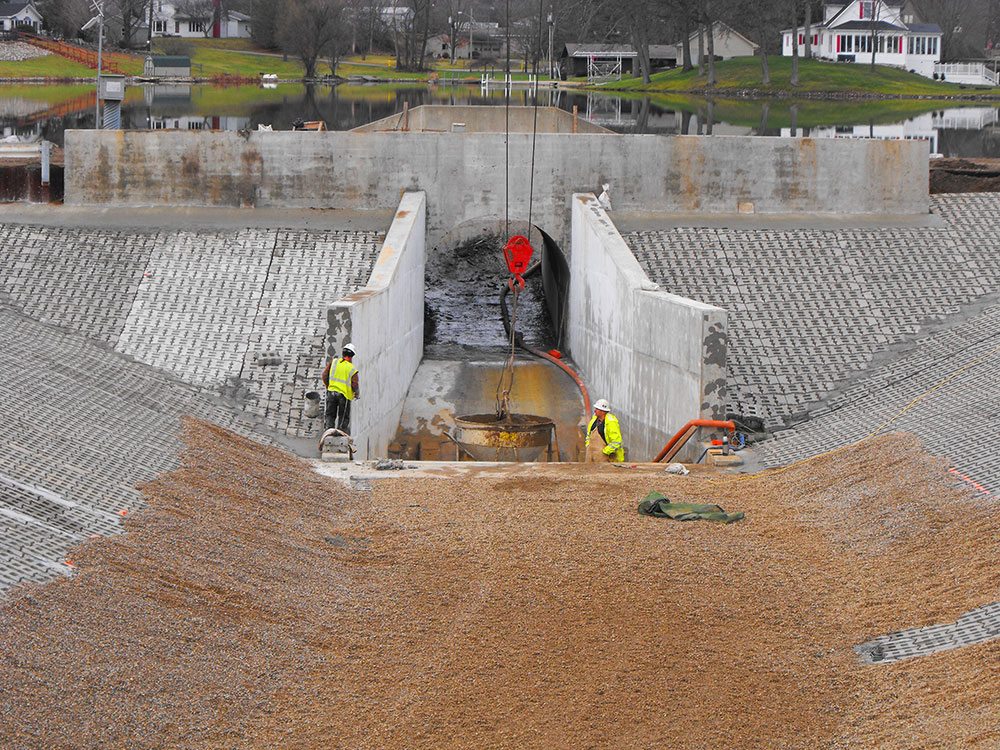 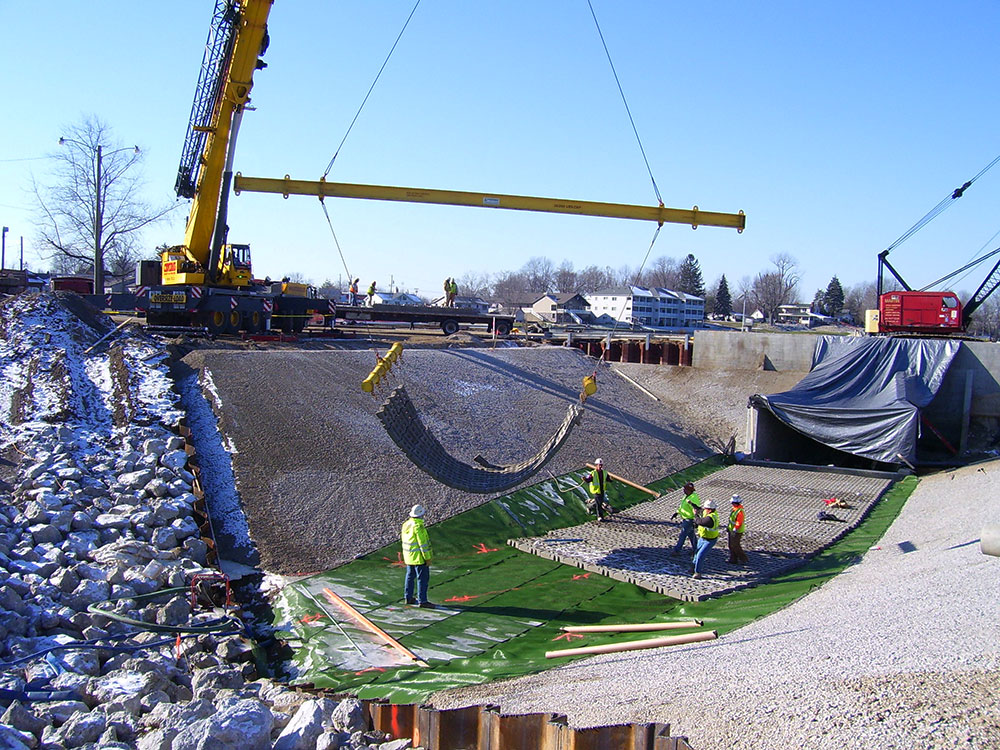 HIS Constructors, Inc. (HIS) was selected by the United States Army Corps of Engineers (USACE) to complete a large flood reduction levee project within the city limits of Indianapolis, IN. The “Levee Project” was located in an older, diverse residential setting within the actual city limits of Indianapolis and was comprised of 3 distinct phases of an ongoing flood reduction project.

Phase one of the project consisted of clearing, grubbing and removing approximately 5 acres of heavily wooded land along the old, earthen levee site. Due to the near proximity of the residential neighborhood great care was used to remove only the trees necessary to properly execute the project goals while maintaining the visual esthetics of the area and maintain good relationships with the owners of the residences. Initially, there was concern over the possible habitat destruction of a protected species of bats, but intense studies at the start of the project proved that concern invalid. The goal of the overall project was to remove the existing earthen levee which was determined to be insufficient in size and construction for the USACE flood prevention requirements.

Approximately 38,000 tons of existing levee material was removed and transported to a local sanitary landfill for disposal. The integrity of the old levee was compromised due to the integration of logs, glass, trash and other un-compactable materials during original construction. Again, due to the nature of the location care was exercised for the increased truck traffic required to remove old levee material and facilitate the import of new construction materials. 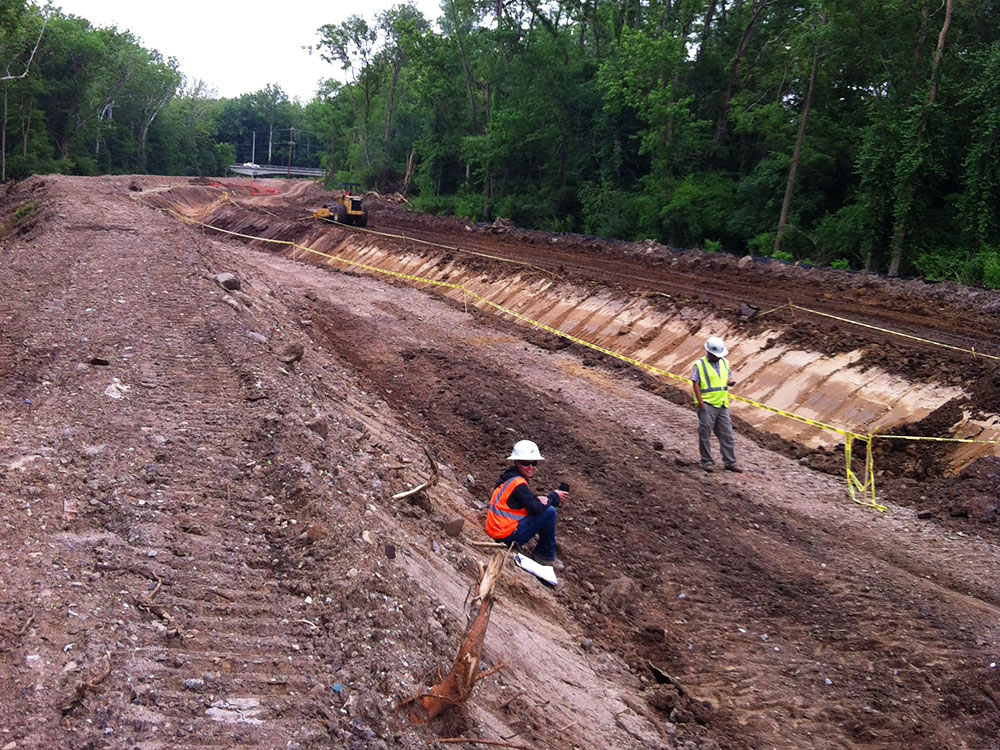